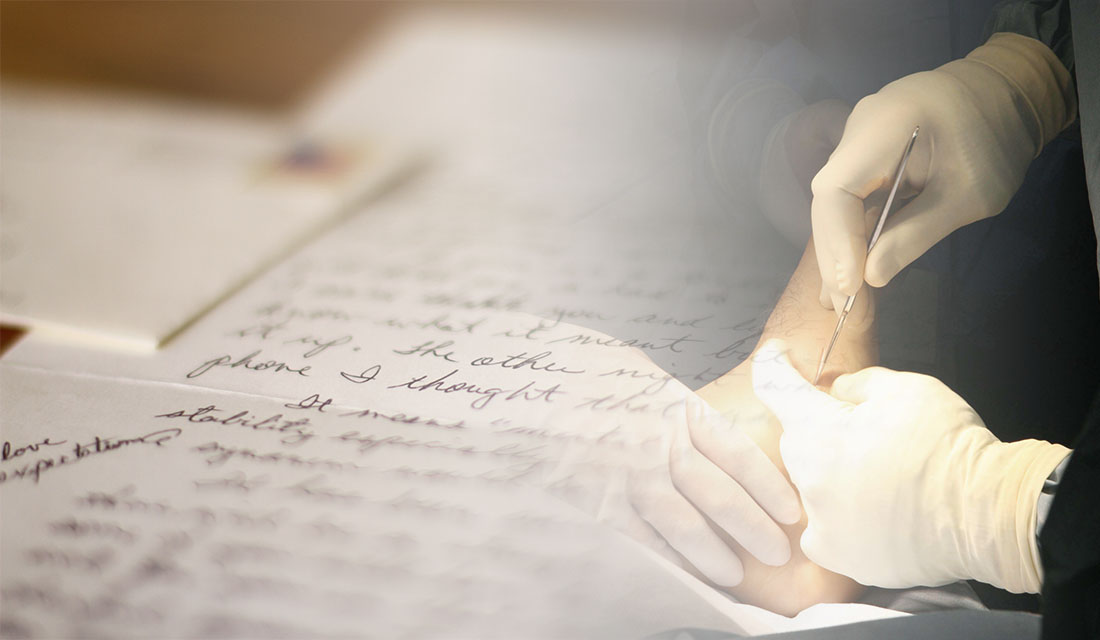 During a challenging season of my life, I received a handwritten letter from my father. One of only a handful, and each one treasured, but especially this one. It wasn’t a very long letter, but the impact will last forever. The lesson he shared can be summed up in a single word. Equanimity. But it was the story that made it stick. And humor that reconnected a father with his distant daughter.

I had never heard of the word, and though touched by the empathy that prompted such rare communication from my busy father, I was not nearly as interested in displaying the quality he knew the situation demanded. I needed to remain calm, stable, and composed under the stress of my circumstances, but I had absolutely no idea how. Or that it was even an option. All I knew to do was react the way I always did. Like it was a national disaster.

It was in the early 50’s that a sleep-deprived surgical resident faced his own challenges, and first learned the meaning of equanimity. As chief resident, with a situation on his hands that he no idea how to handle, he sought advice from someone older, wiser. Someone who knew exactly what this young man needed. And with the directness and brevity you might expect from the Chief of Staff of a large teaching hospital, a recent med school grad {who would soon become my father} was told that he needed equanimity. And with absolutely no idea what he had just been told, my dad mustered a calm, steady, decisive-sounding, “Yes sir,” then went straight to find a dictionary.

Surgery requires a cool head. A steady hand. And I love the valuable lesson this was for my father as he prepared for countless life-and-death dilemmas he would face over the course of his career. I love the lesson it became for me also in situations that require no less delicate and skillful handling of hearts and relationships. I’m thankful that in the wisdom of his advancing years, my father is opening up with stories I’ve never heard before that help me understand and appreciate this amazing man in my advancing years. Before it’s too late…

One of the ways my father continues to keep a cool head is with his sense of humor. There’s nothing like the sound of his laughter to me, and I love that every time he tells a story, he laughs just as hard at his own punchline as he did the time before. Like it’s the first time he’s ever heard it. It’s one of the signs of a good storyteller … genuinely enjoying our stories; realizing the value they have for others; and laughing hardest our own punchlines. Laughter is good medicine, and stories that open our hearts are a little like surgery. Life-giving. Heart-healing. Full of lessons like … how to remain calm, stable, and composed in the dilemmas of life that require a cool head, steady hand, and tender heart.

Equanimity. I see it everyday in the UnbridledACTS community. I’m finally seeing in my own life, thanks to those who model it for me. And it came full circle in my relationship with my father recently when, at 92, he was able to meet my ACTS family during a family wedding that was beyond my wildest dreams. In one brief conversation, a new understanding was forged, along with love and appreciation for those who have so profoundly impacted his daughter by who they are and how they live. And just when it seemed it might be too late, a father and daughter put aside differences to celebrate similarities by opening their hearts to understand, accept, and simply love each other.

The lesson, of course, is this: Life requires a cool head, steady hand, and tender heart for the delicate complexities we all face, especially when it comes to reconciling important relationships … before it’s too late. For those who can this Father’s Day, I hope you’ll listen to your dad’s stories. Or your son’s. That you’ll enjoy his laugh. Let him enjoy yours. Maybe even write a letter. Longhand.

And if that’s not possible, I pray that something you’ve heard in this story will help you celebrate what was good between you and your dad, and be willing to look back at what wasn’t with an open heart that brings new understanding and healing … beyond your wildest dreams.

It’s not too late. Fathers, young and old, can learn what they have absolutely no idea how to do, or be, from those who are older and wiser. Even when dads are not around for one reason or the other, there are other ‘dads’ everywhere, looking for sons and daughters who need a lesson in equanimity.