By Julie MilesNovember 4, 2016No Comments

It’s a great expression. One we hardly use anymore, and many of you have never even heard before…which explains the nostalgia it stirred up in me when Stan used it recently at the ACTS House. {He’s also fond of “kicking the can down the road.” Ever heard that one?}

It’s sayings like these that connect us to bygone days when our parents and grandparents played Marbles and Jacks and Pick-Up Sticks and Tiddledy-Winks…using “shooters” that had nothing to do with alcohol or guns. Think Norman Rockwell and Saturday Evening Post… 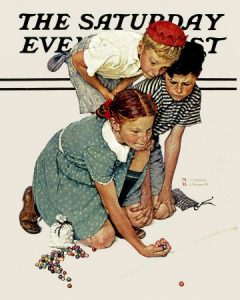 Historically, “taking my marbles and going home” referred to a person who opted out of a game or process prematurely because they didn’t like the way things were going. Otherwise known as a quitter. “Take your marbles and go home,” on the other hand, would have meant you’re the one being thrown out of said game or process for cheating or being a bad sport or just plain irritating…if you know what I mean.

Ever walked away from a conversation in a huff…in the middle of someone’s sentence? Or stormed out of a meeting when it took a turn for the worst, according to…yoo hoo? Ever quit when you’re behind or give up when things get hard? What about suddenly noticing a certain irritating quality in your voice that sounds a little like a child…and a lot like whining?

Maybe it was so long ago you hardly remember. Maybe it was just yesterday. It doesn’t really matter. This isn’t about pointing fingers or drudging up the unpleasantness of long-ago playground experiences. And it’s certainly not about name-calling. The Journal doesn’t play that way…so quit whining. {Just kidding!}

The point is to notice. To become aware of childish games we may still be playing with ourselves and with others. Games that didn’t work very well then…and certainly don’t work now. Again, no shame. No name-calling. No internal bullying of those parts of yourself that feel ill-equipped for adulting.

And that, my friends, is when we know we’re ready to leave those childish ways behind and not waste one more minute wishing for days gone by. Because the truth is…the game’s not over ’til it’s over. And it’s never too late to pick up those marbles, get back in the game, and give yourself another shot.